Having finally created working strethcy IK legs, I could get to work on making a set of FK legs. Like the IK, I duplicated the deform skeleton, but replaced the _jnt with FK_jnt. Unlike creating the IK leg, I didn’t need to create anything except controllers. I used the curve tool with snap to vertex turned on and drew the shapes around the mesh of the monkey. I used the MEL script “parent -r -s” to attach all the curve shapes to a single curve node so that the animator can click on any of the curves to select the entire controller.

The thigh and ankle controllers I drew with curves, but I just used circles (which I editted slightly) for the knee and tibia joints. To try and keep the rig clear to use I colour coded my controllers. The most important controllers I changed to a brighter colour and the less important ones (like the tibia joints) were darker. 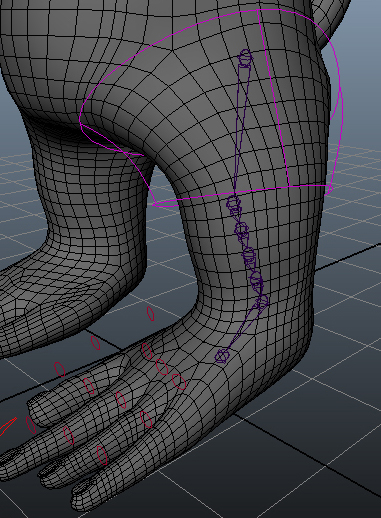 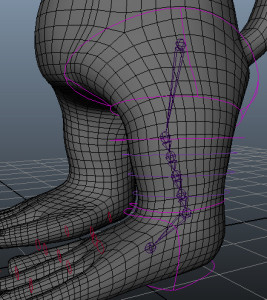 Like before, I nested all of these controllers in a double set of groups (_SDK and _0). I then parent constrained each FK joint to its relative controller. 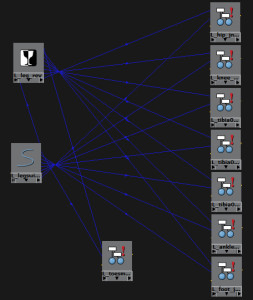 I decided to colour code the IK and FK so that it is clear at a glance whether the leg is set to FK or IK. For the IK I chose red (left) and blue (right), and for FK I chose pink (left) and green (right). However, since the toes are the same controllers whether the leg is in IK or FK, the controllers were just a single colour. I spent a bit of time trying to work out how to use the switch to drive the colour override for the control shapes. Eventually I found that I could use a condition node that was true when the switch was above 0.5 and false when below 0.5. Then I wired the condition node to the drawing override of the controller. As the drawing override is not in the short list of things in the hypershade I had to open the connection editor and wire them up in there. 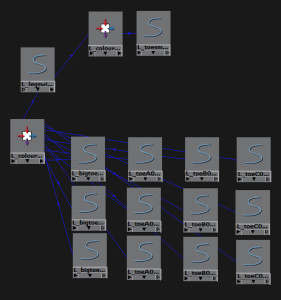 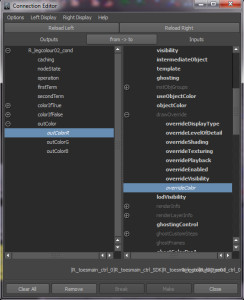 Finally, I had to work out what number represented each colour. With some trial and error I eventually found the values and wired up all of the toe controllers so that they change colour. Success! 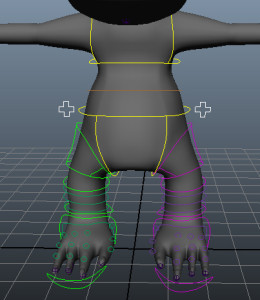